Trumpeter Swans ( Cygnus buccinator ) spend the winter on ice-free coastal and inland waters. The weather we are experiencing is an arctic airflow and the temperatures are unusually cold. When I was photographing these Trumpeter Swans the wind chill made the temperature about twenty degrees below zero ( Celsius ). The slough where they usually forage for food is frozen, so they are unable to eat aquatic vegetation. I hope the weather becomes milder, the ice breaks up, and they are able to find something to eat. Click on any one of the photos to see a larger version and then use your left and right keys to scroll through the gallery. 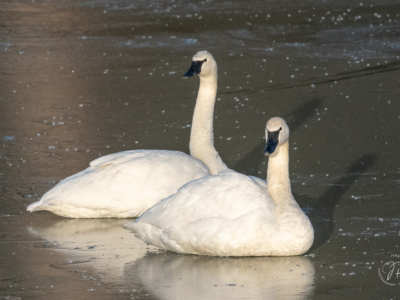 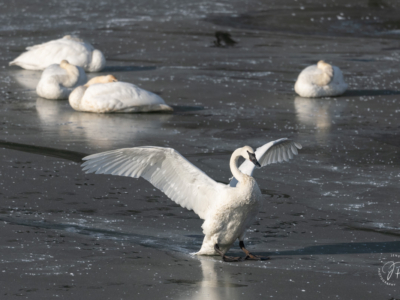 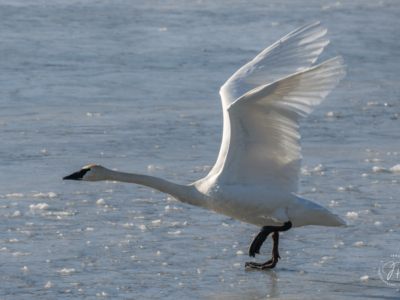 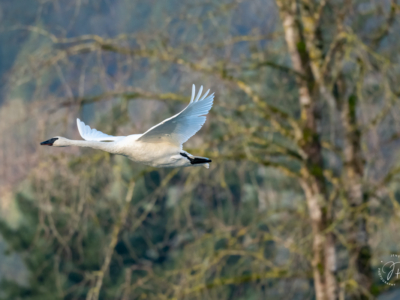 We received some snow last night and I decided this morning to get outside with my camera. The wind was howling, it was cold and the snow was blowing horizontally, but walking in a winter storm was a refreshing change of pace. I didn’t see any other people and the birds were more relaxed with my presence. I came across this Bald Eagle ( Haliaeetus leucocephalus ) perched on a branch and I could see it was using its nicitating membrane to protect its eye from the snow and wind. The nicitating membrane is like a third or inner eyelid that sweeps across the eye from side to side. It’s either translucent or semi-transparent while it covers the eye. It reminds me of someone wearing goggles while skiing in a snowstorm.

A medium-sized bird that is found on any open water from ponds to ocean, the Double-crested Cormorant ( Phalacrocorax auritus ) lives on the west coast year round. They lack waterproof feathers, so I’ll often seem them perched in the sun and using the technique of ‘wing-spreading’ to dry their feathers after swimming. The double crest is only visible on adults during the breeding season ( March to May ). They have orange-yellow skin on their face and throat and striking aquamarine eyes that sparkle like jewels.

It was raining heavily when I came across this male Hooded Merganser ( Lophodytes cucullatus ). This is a small duck with a slender bill and a hood ( crest ) that can be raised or lowered, which changes the shape of the head and the white head patch. Hooded Mergansers are fairly common on small ponds and rivers, where they dive for fish, and other food, seizing it in their thin, serrated bills.

May the New Year bring you happiness, peace, and prosperity. Wishing you a joyous 2021!

Photographic minimalism is popular on social media sites like Instagram. It’s an art style that started in the 1960’s. The guiding principle of minimalism is less is more. It should be simplistic, clean and the viewer should clearly understand what is the photo’s subject. There should be no doubt about what you are looking at in the photo. It’s a very fine line between a photo that speaks to you, has some meaning or just taking a boring photo. It reminds me of the saying ‘Simple is hard’. Click on the image to see a larger version with a black background. 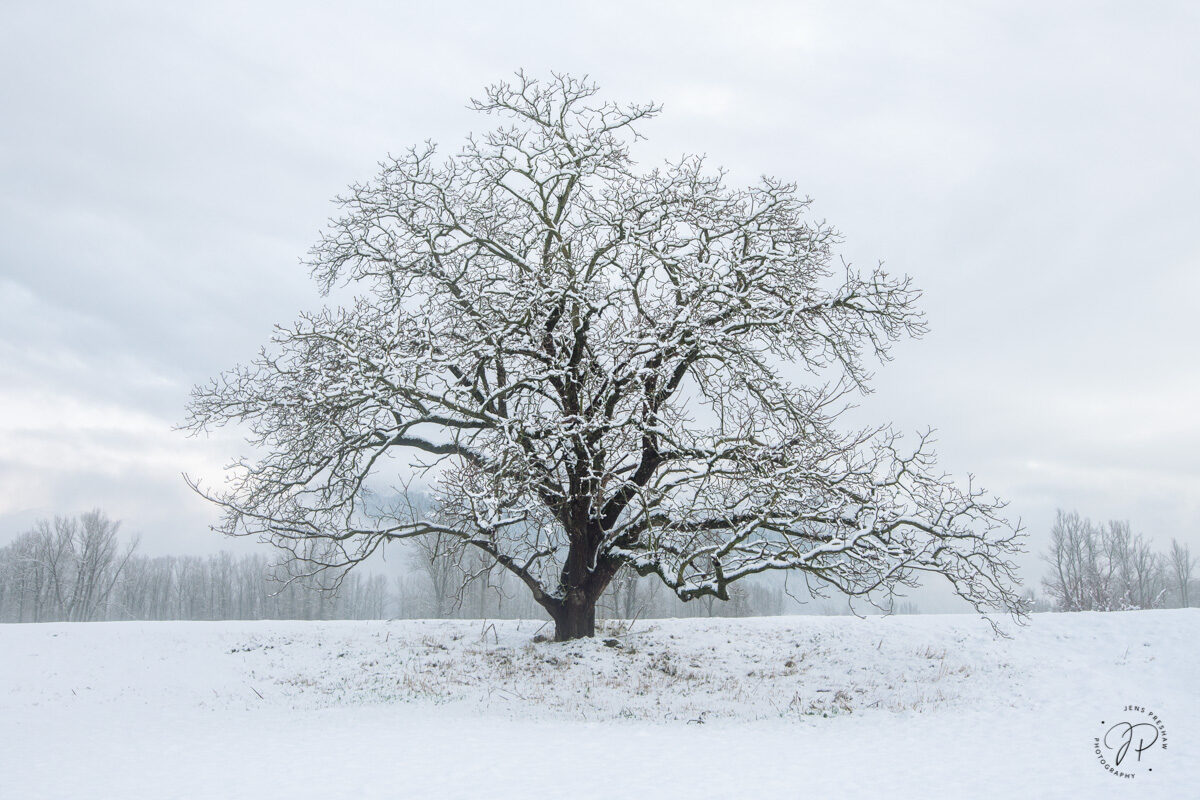 A Juvenile and two Adult Bald Eagles ( Haliaeetus leucocephalus ) after a fresh snowfall. In the winter the sun is farther south and creates beautiful sidelight and shadows. There is not an absence of colour in the winter. Click on a photo and then use your left and right arrow keys to scroll through the gallery. 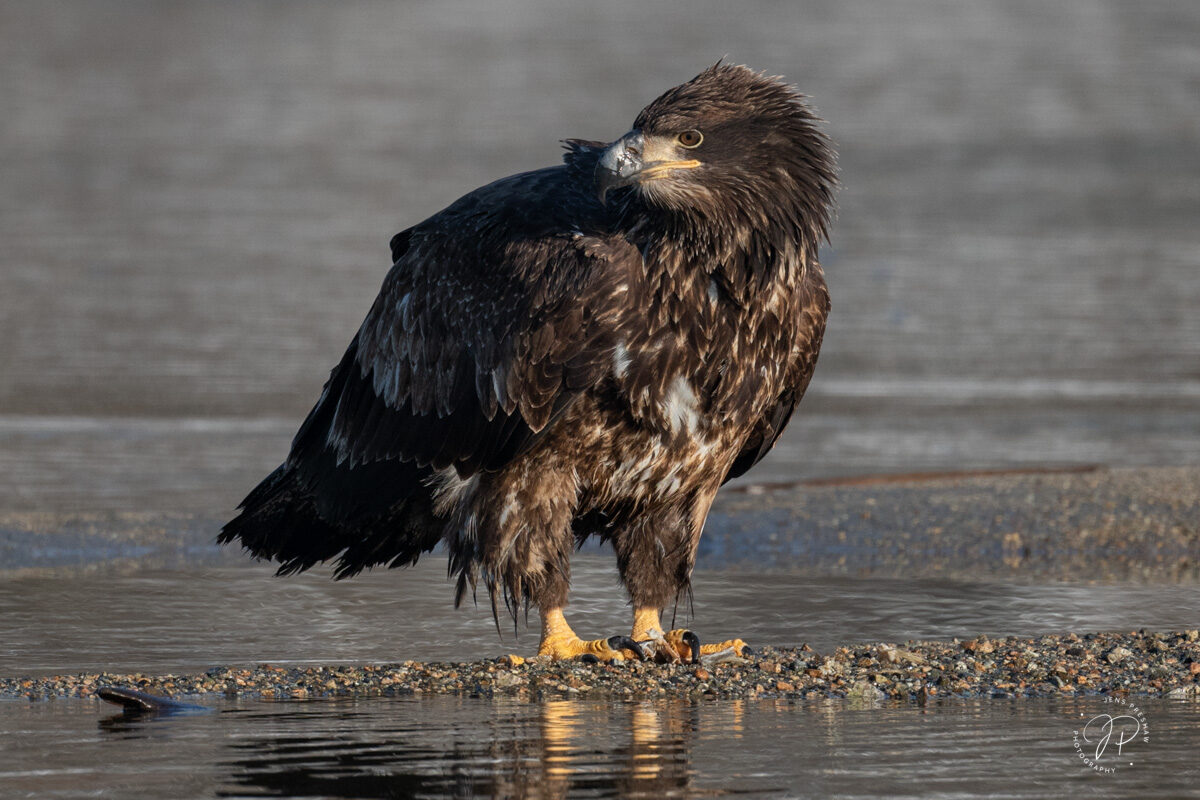 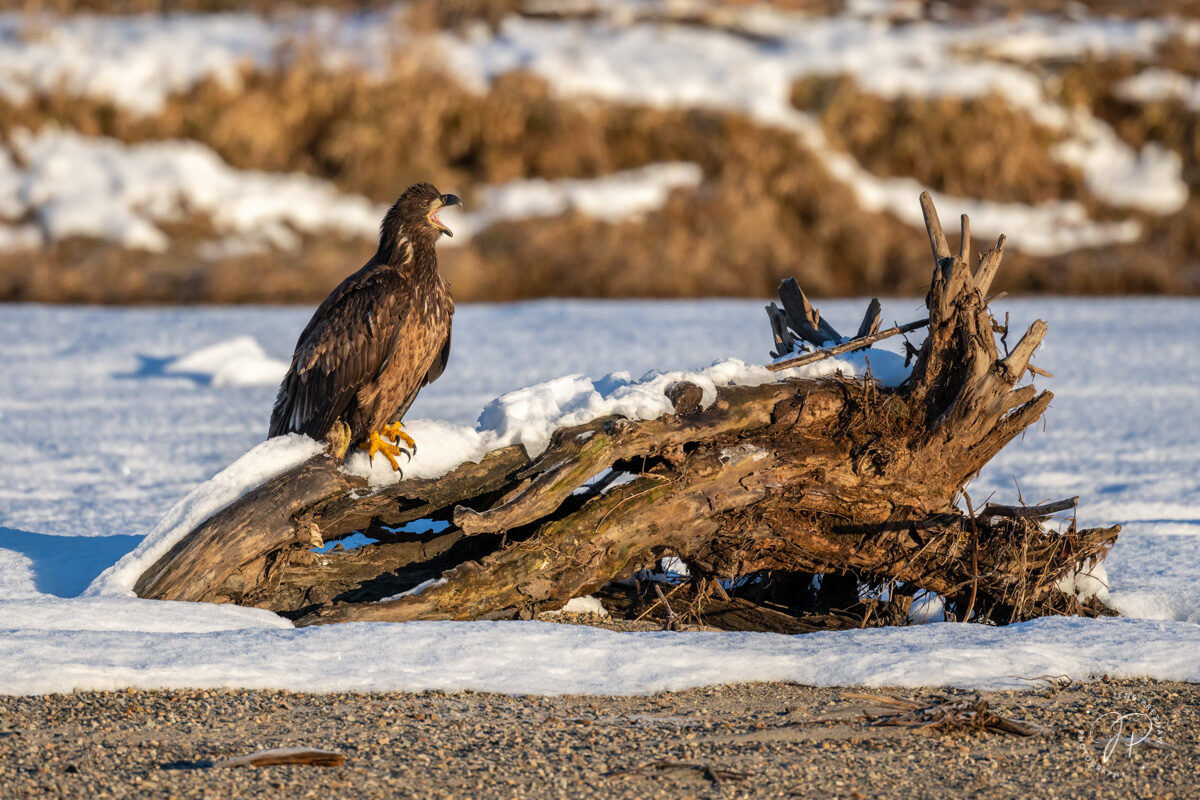 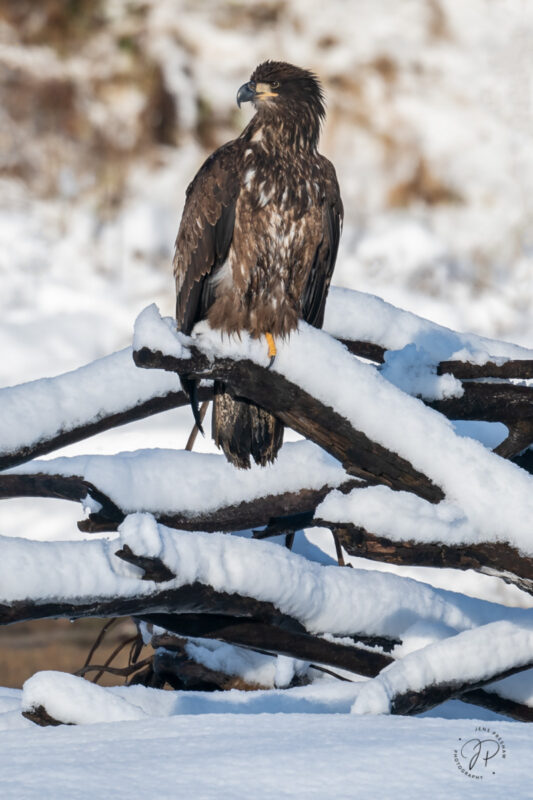 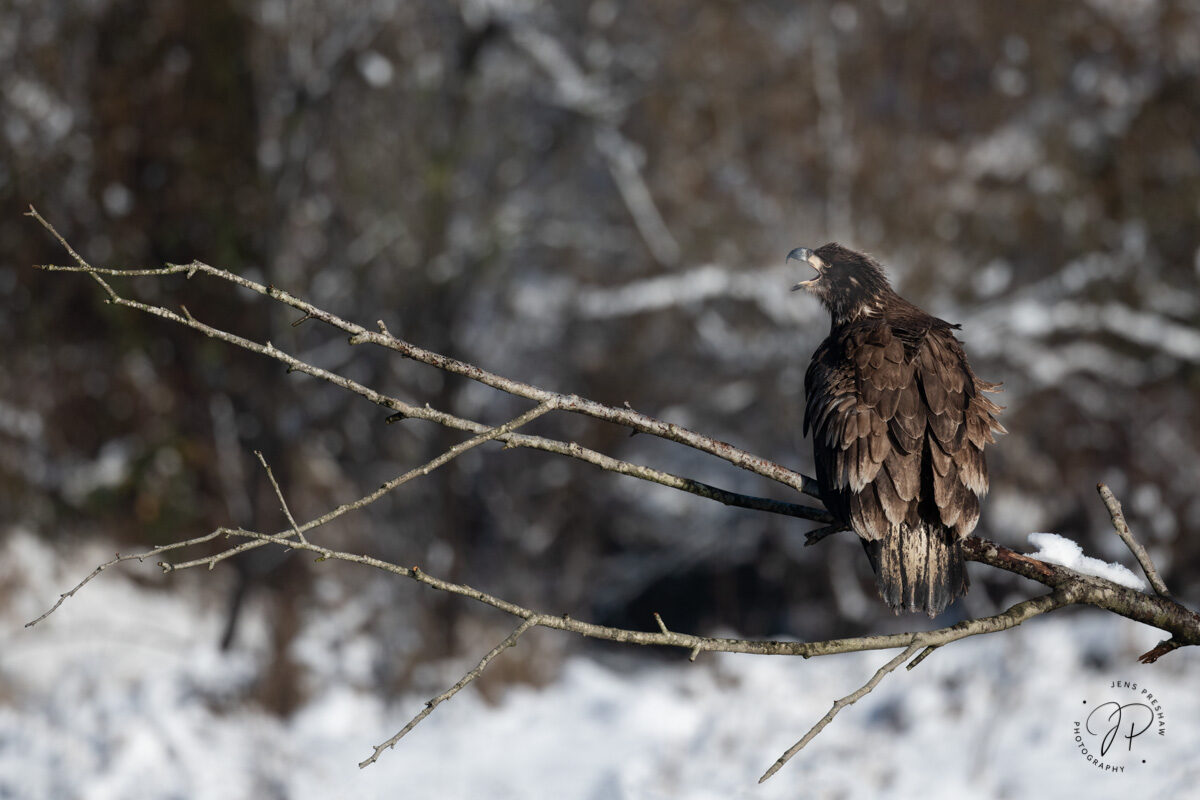 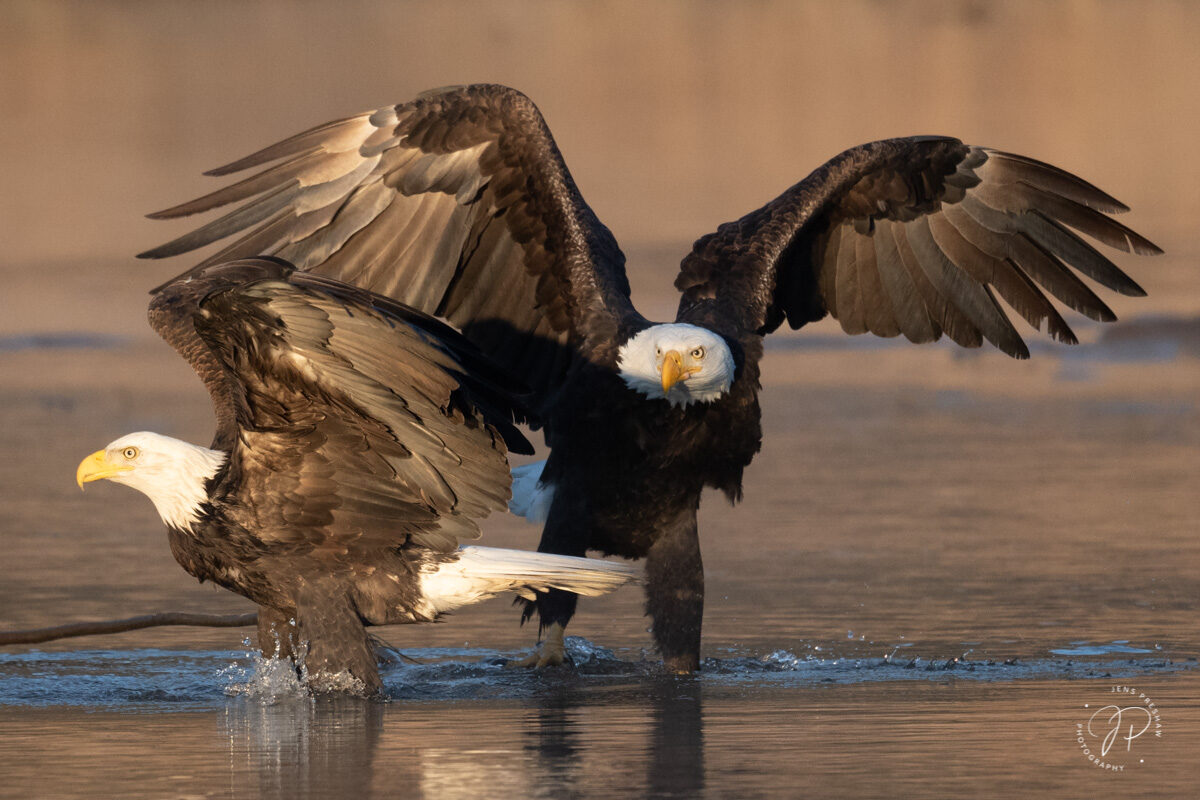 With their Superman-like vision and sharp talons I never tire of taking images of these majestic birds. No baiting or calling was used in taking photos of these Bald Eagles ( Haliaeetus leucocephalus ). Click on a photo and then use your left and right arrow keys to scroll through the gallery. 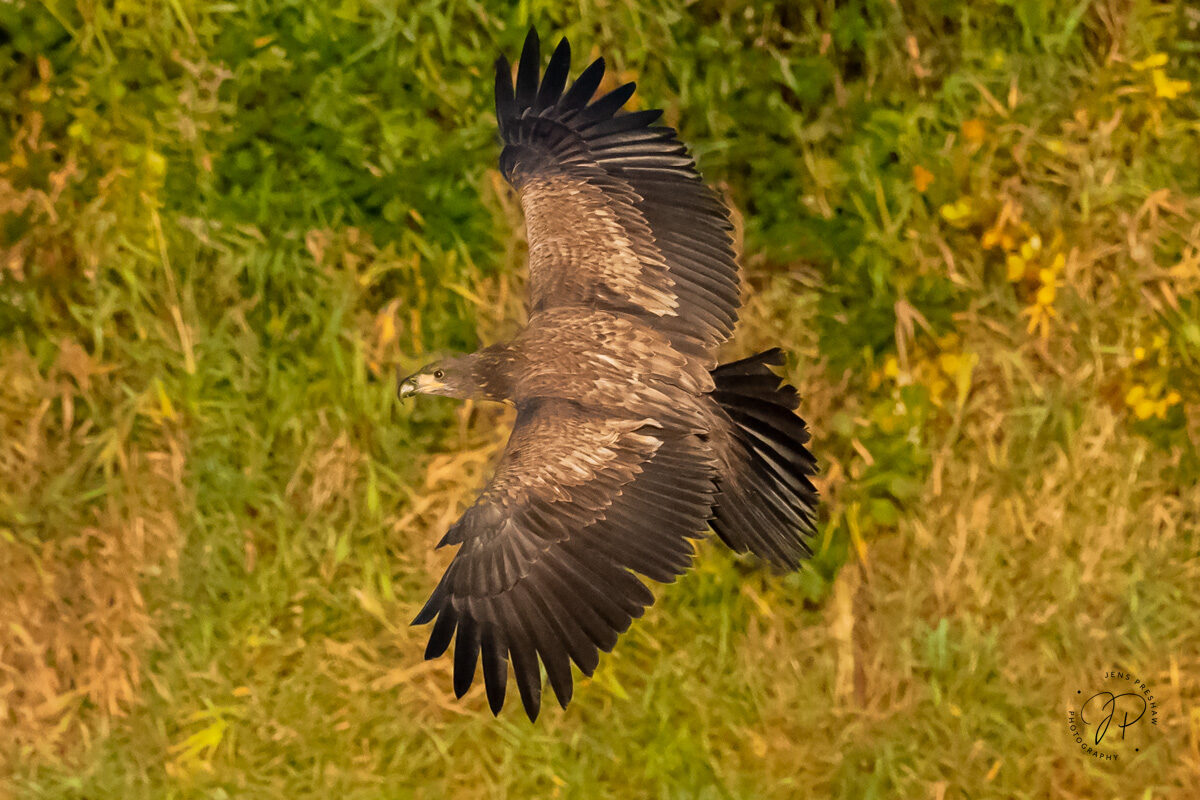 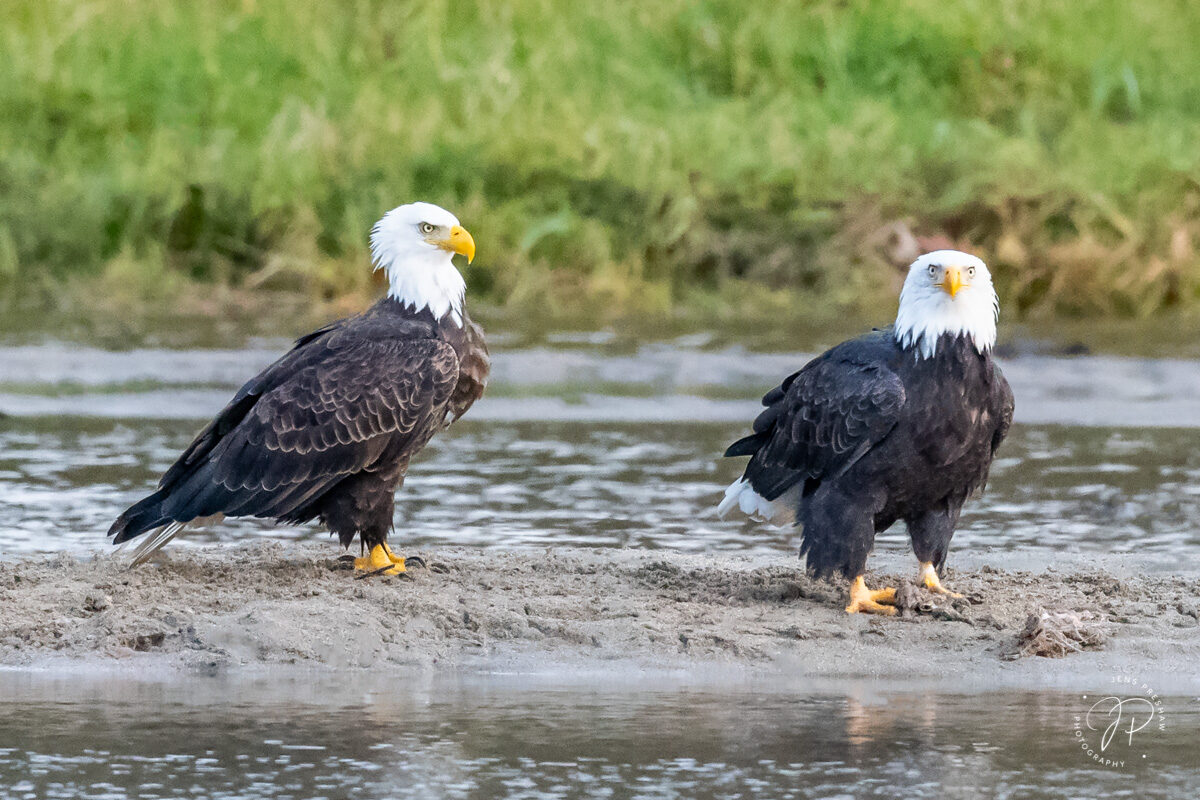 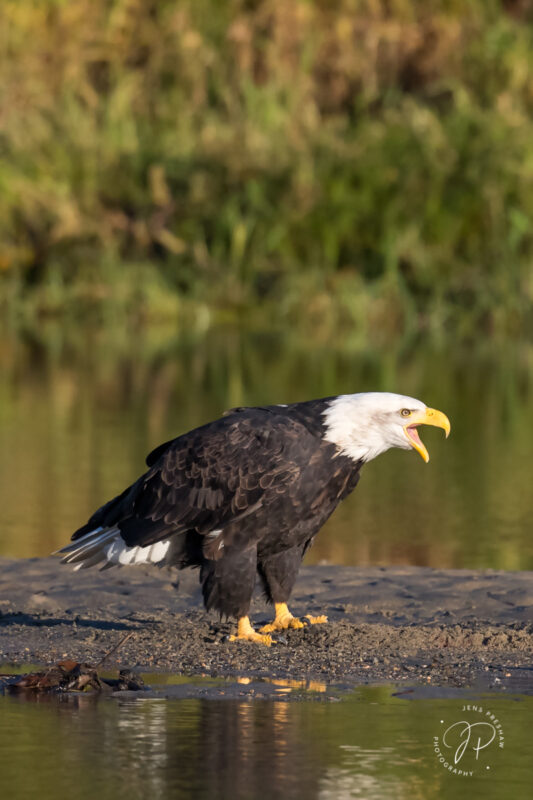 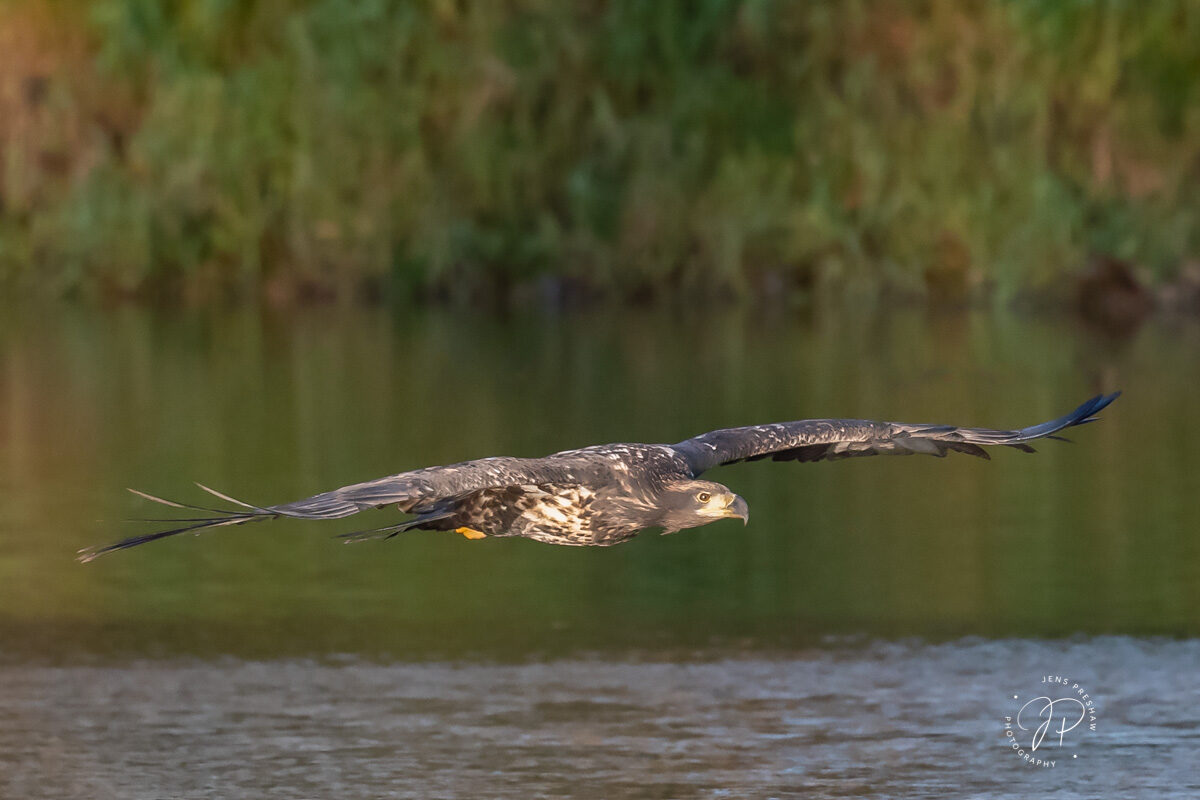 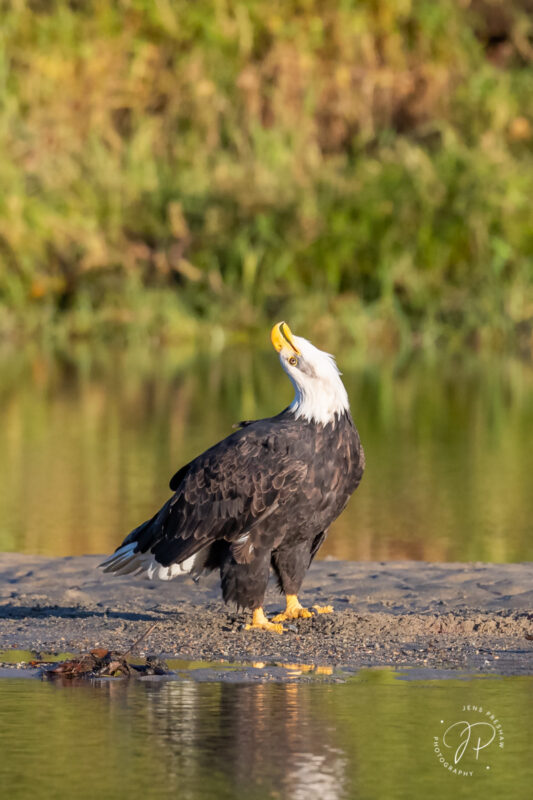 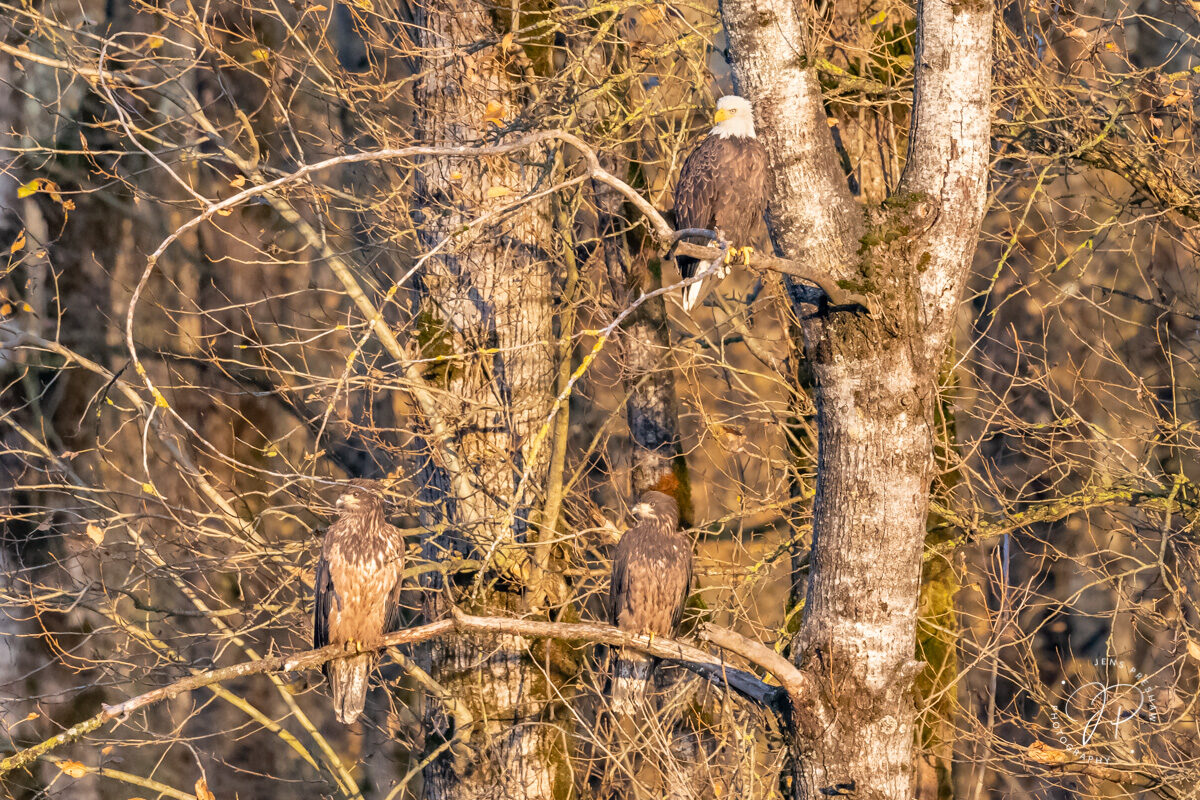 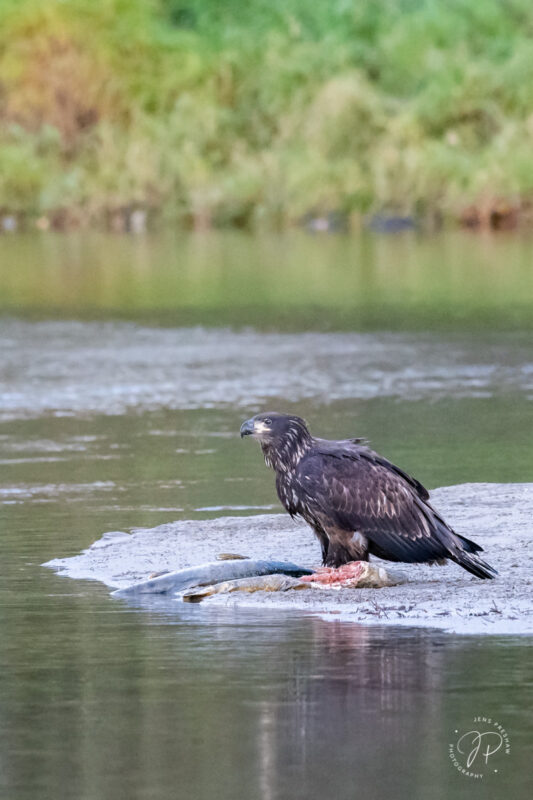 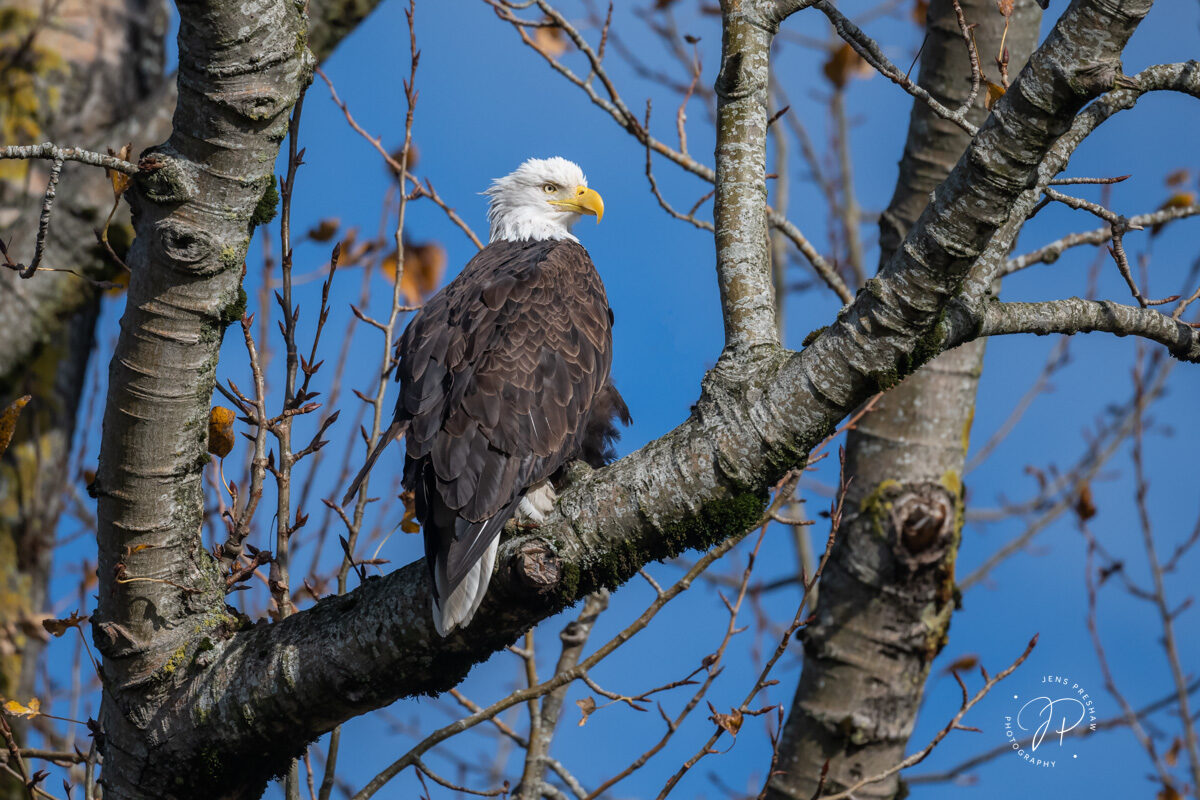 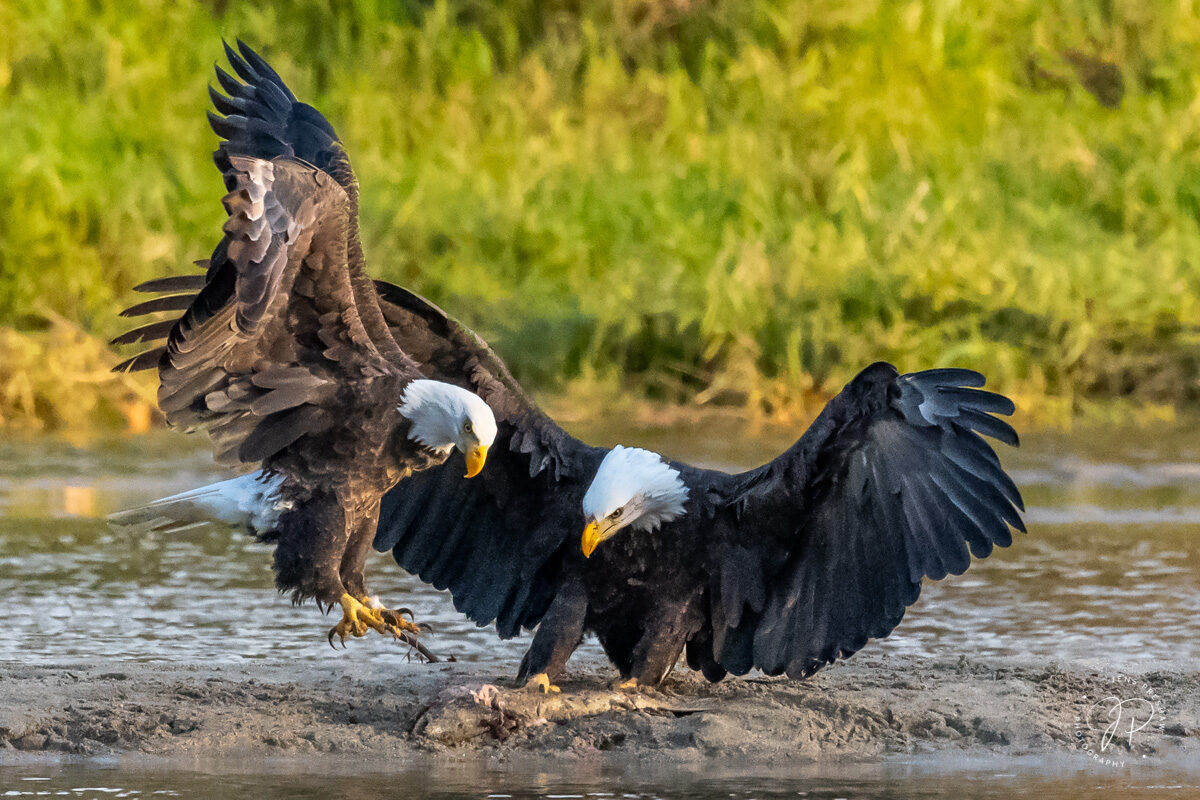 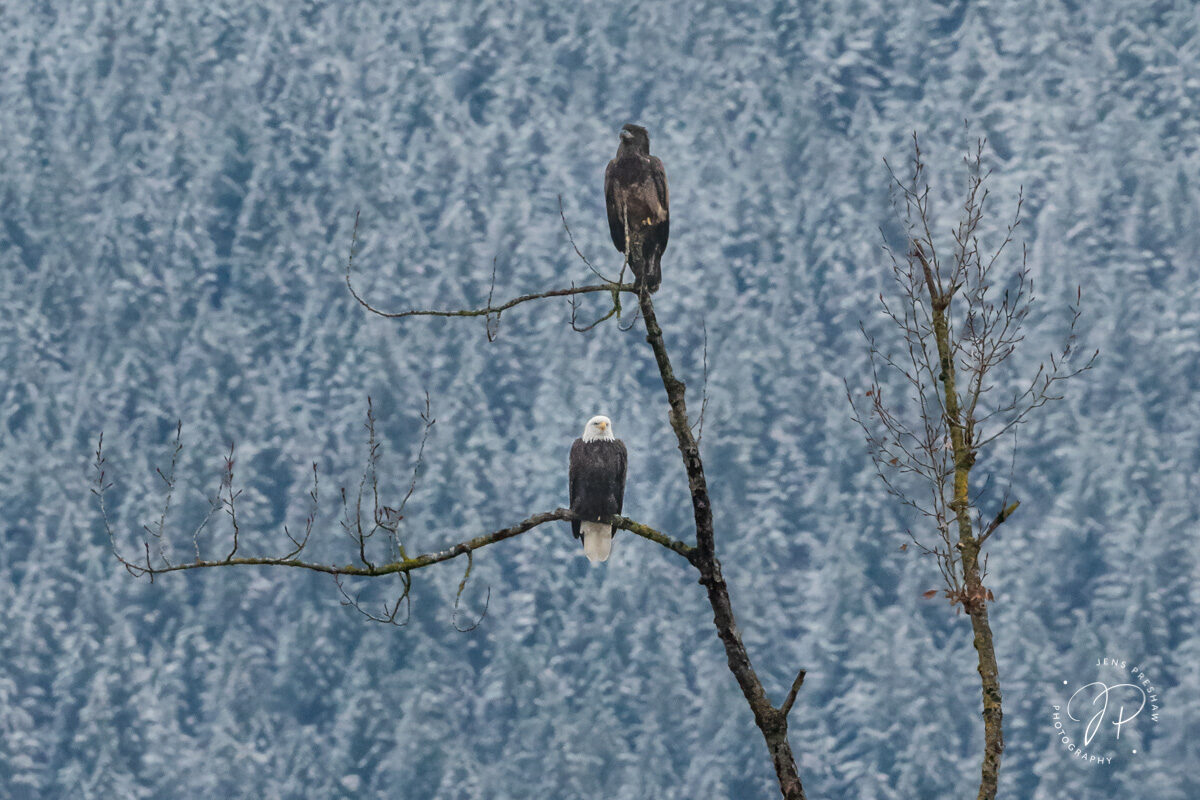 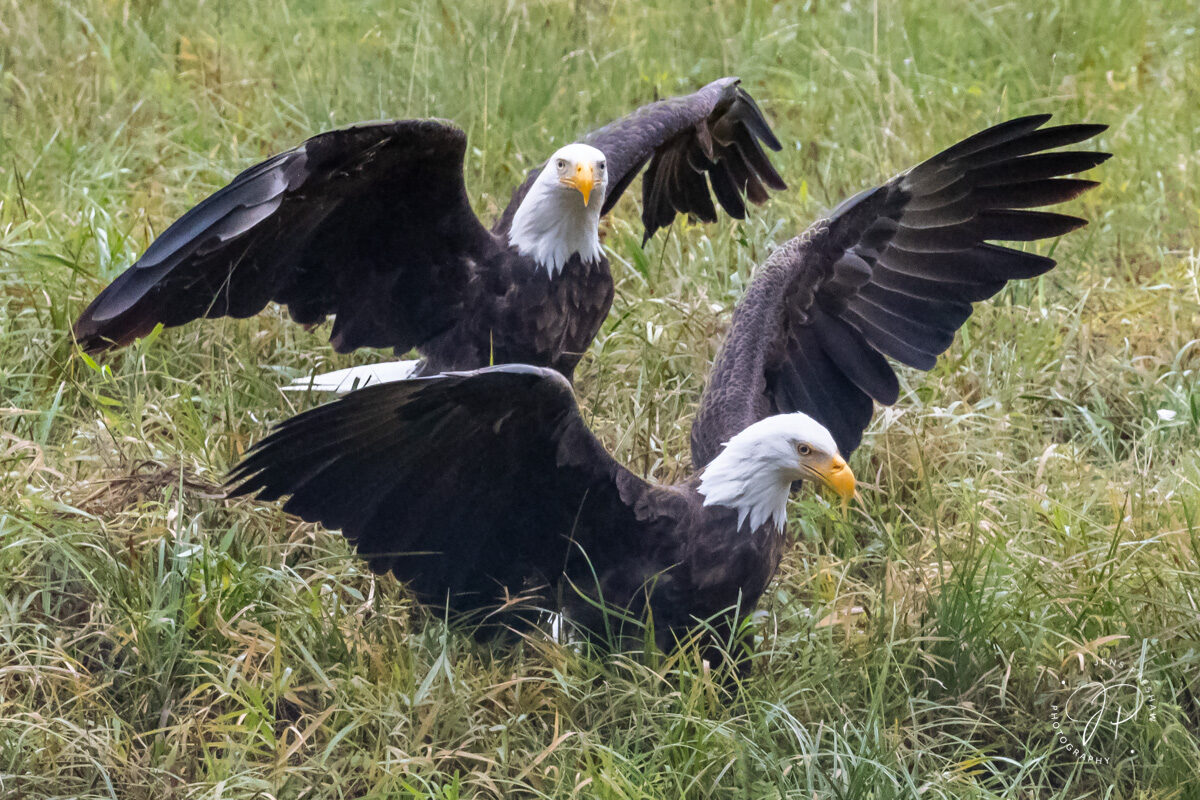 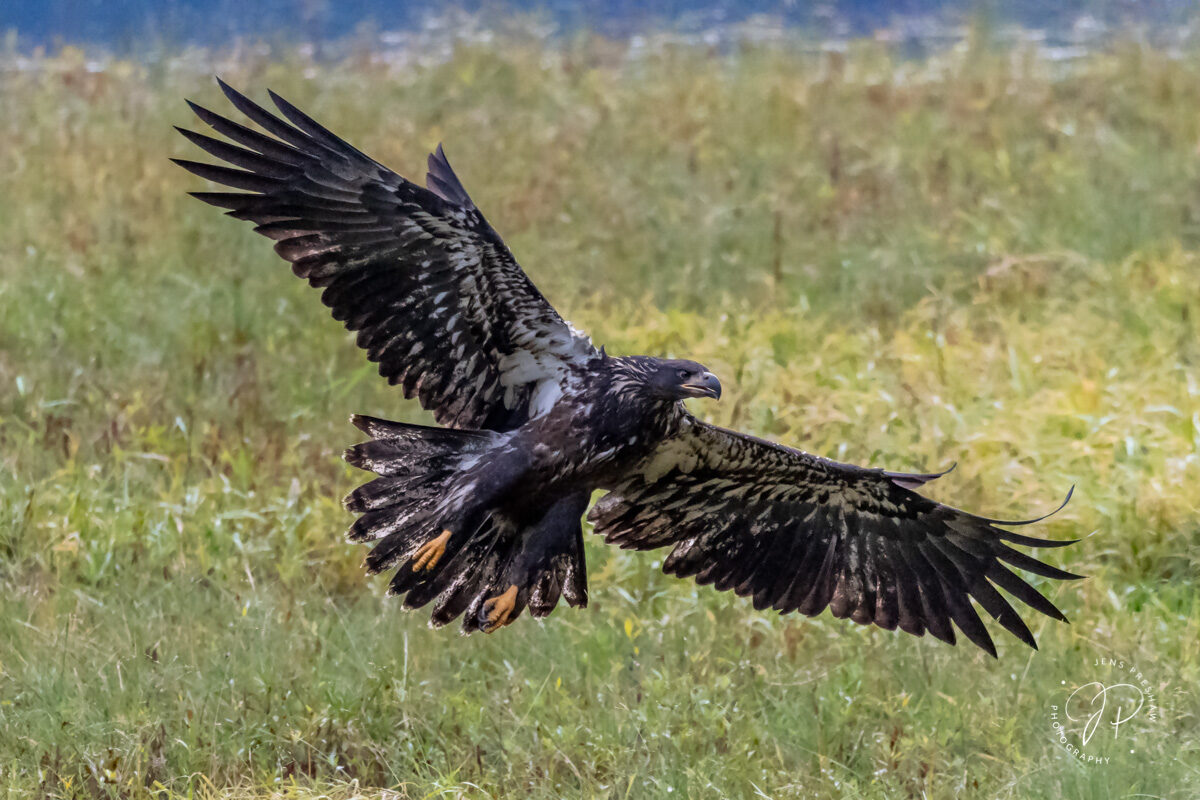 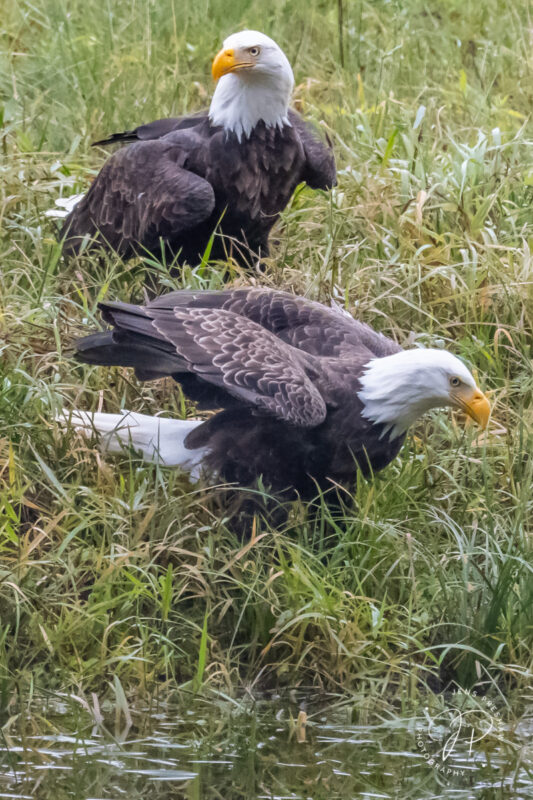 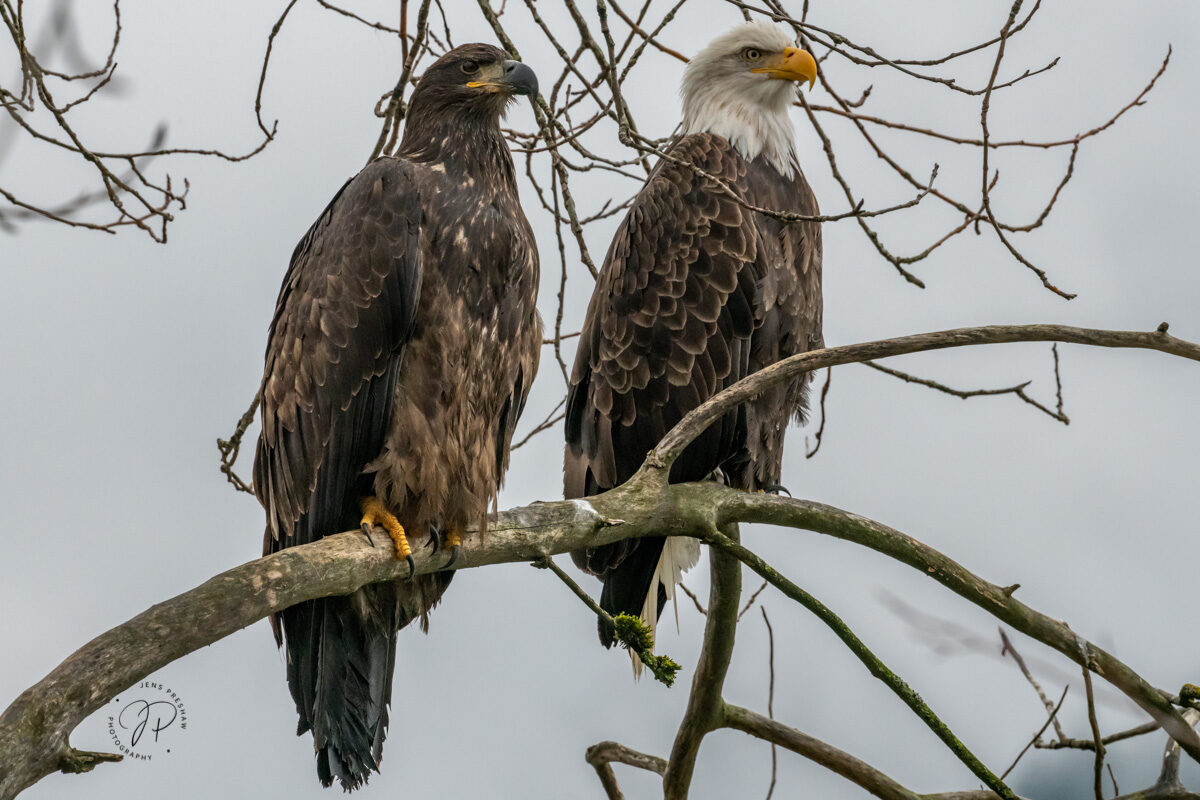 The opportunistic Bald Eagle ( Haliaeetus leucocephalus ) looks on as a huge flock of Lesser Snow Geese ( Chen caerulescens ) take off. I was amazed how calm the Bald Eagle remained despite the sudden noise and explosion of feathers.

The Story Behind the Photo # 1

When I spotted this Bald Eagle ( Haliaeetus leucocephalus ) in the distance, I realized the mountain range in the background, would allow me to create a beautiful animalscape, by combining the Bald Eagle, stump, marsh, ocean and mountains. Unfortunately, I was too far away for a good photo. I considered slowly approaching the Bald Eagle but that involved scrambling over slippery logs and through soggy marsh. I knew as soon as I got closer to the Bald Eagle it would more than likely fly away. Despite the slim chance of getting close enough for a good image, I decided to give it a try and started moving from one slippery log to the next. It took quite awhile to move a short distance and during this time the clouds moved in and obscured some of the distant mountain peaks. Eventually another Bald Eagle flew over top of the Bald Eagle which was perched on the stump. It wasn’t very happy with this intrusion into its space and made a weak sounding call. I quickly took the photo and made my way back through the marsh, my hiking boots and socks were soaked.